One of the holiday-esque manis I promised from a few weeks ago. This one is really subtle, but sparkly, which I think works since this time of year is so darn sparkly with all the lights, and decorated trees.

Please excuse how dry my skin is, I've been having a hard time protecting my hands lately. 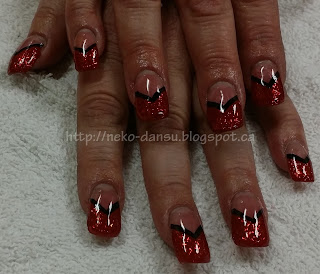 Did this lovely set on a wonderful lady last week. She wanted sparkling red tips for her cruise. We used her own polishes, I didn't make a note of the name of each, but a true red polish was used as a base for the chevron tip, then they were coated with a chunky glitter in matching red. We topped it off with a nice black stripe to make the red really pop.

Originally I had planned a blood moon mani for this last week of October. Although, every attempt it fought me, so next year perhaps.

So instead I bring you a blingy planchette (you know the little pointing device for Ouija boards).

I hope you all have a safe, happy and positively frightening Halloween!

See you next week with some Christmas themes.

"Howl You Doin'" China Glaze
"Black Out" Sally Hansen
Posted by Unknown at 19:39 No comments:

Some glow in the dark ghosties. This one was easy and fast.

Another Halloween one! Pink and blue skies filled with bats!

Honesty I think bats are adorable with their little turned up noses, but I get how some people find them frightening.

I started the bats using some bundle monster plates but the polish I used refused to transfer well so I ended up just painting them over.

It's finally October! It's time for Halloween manicures!

This year we're starting off with something hopefully everyone recognizes; Candy Corn!

I originally thought this was going to be quick and easy but it turned into something much more painstaking. I'm quite out of practise, so it took a lot longer and my lines aren't nearly as nice as they could be.
When I first picked up this colour it looked like the perfect orange creme, although once I got it out of the bottle onto my nails I learned how much of a neon it really was. It is a really bright shade, I was not prepared for how bright it is. I found it also went on a bit streaky (as neons tend to), even after three coats, that was a little frustrating. But, it is a very pretty shade of orange.
Also my nail on my middle finger broke really close to the nail bed, which is why it's much shorter than the rest. It also broke in a really strange way, the under layer (can I call it that?) of the free edge is what broke but it's attached to the skin firmly so removing it would be unwise. The top layer is fine though. I guess I just have to let it grow out.
Anyway, I have a few manicures planned for this month, stay tuned for more Halloween-y goodness.

"Lady and the Vamp" China Glaze (Halloween 2015 Collection)
Posted by Unknown at 20:00 No comments: 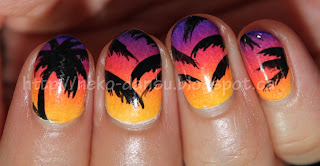 Palm trees and leave on a sunset gradient background. Fall is fast approaching despite having a horrible muggy heatwave here, this is my ode to the last days of summer of 2015.